Oat groats are the whole grain of the oat plant.

They can be eaten raw, toasted, or cooked. Oat groats have a chewy texture and nutty flavor. When cooked, they become softer and have a porridge-like consistency.

They are a great source of soluble fiber, protein, and various vitamins and minerals.

Oat groats can be cooked as porridge or used in baking bread. They are also used in a variety of recipes, such as oatmeal, granola, and pilaf. Oat groats are one of the healthiest foods that exist.

Moreover, they are very healthy because of their high fiber content, approximately 8 grams per 100 g of oat groats.

Fiber feeds our good bacteria, contributes to bowel health, and helps us feel full for longer.

WHAT ARE OAT GROATS

They are an ancient grain that is a staple food in many cultures.

Oats groats are the whole “naked” oat kernel, with only the hull removed.

They are harvested in either of two ways: one-half or more of the straw may be left on while harvesting, then threshed to remove the grain; or they can be harvested by direct combine where both straw and grain are threshed at the same time.

Oat groats are the uncooked oats before they’ve been processed into quick oats or rolled oats.

Oat groats can be ground down into flour or used as cereal and they have been proven to lower cholesterol levels.

They can be found at your local grocery store and have a similar consistency to rice.

DIFFERENCE BETWEEN OATS AND OAT GROATS

Oats are tiny grains that can be consumed either whole, steel-cut, or oatmeal.

Oats are a type of cereal grain that is grown in cooler climates and used to make porridge, oatmeal, and granola. Oat groats are the whole oats without any hulls or outer coating.

The two can be confused with one another because they have similar names but there are some key differences between them.

Oat groats have been processed less than oats, but either one will provide your body with a hearty dose of fiber and nutrients like iron, magnesium, and zinc.

The debate between steel-cut oats and oat groats is one that has been going on for years.

Recently, a new study was conducted to find out which type of oats are the healthiest. The results were surprising because both types of oats had many benefits.

Steel-cut and oat groats are both cut into 2-3 pieces that don’t reduce the overall taste or nutritional value. HOW TO COOK OAT GROATS Oat groats are a whole grain that is gluten-free and incredibly healthy for you.

They are made from oat kernels, which have been soaked in water to soften them before they’re cooked and then dried.

As such, they take longer to cook than rice or other grains because the water has soaked into the kernel so it takes more time to heat up.

Do oat groats need to be soaked?

Yes, they need to be soaked overnight.

How long do I need to soak oat groats?

At least 8-12 hours and preferably overnight.

Oat groats are very hard, so to soften them overnight soaking is better. These overnight oat groats will take just 5 mins to cook.

Though an overnight soaking time is there. But you can easily cook them in a rice cooker.

You will love the chewy, nutty taste of these oat groats. This is a whole oats recipe that you will love to cook in your instant pot.

Be sure to soak it at least 4 hours beforehand.

This gonna be a fun and delicious breakfast recipe with more nuts and brown sugar.

3. Groats Oat with Fruits and Nut A super easy and tasty treat with lots of fruits, cinnamon, and maple syrup.

Add more blueberries, pistachios, and strawberries to make it more crunchy and nutritious. This traditional oats recipe tastes awesome and gives an energy boost to your mornings. A great oats breakfast bowl that you can make in an instant pot or on a crockpot too.

Add apple, pears, and maple syrup to make it sweeter.

My Take on Oat Groats

Oat groats are a whole grain that is gluten-free and incredibly healthy for you.

They are made from oat kernels, which have been soaked in water to soften them before they’re cooked and then dried.

Find out at your local store or check out at Amazon. 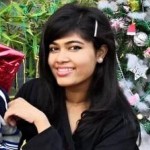 Hey there! I am Moumita